This week we have dedicated the classes to create , imagine Y invent animals or imaginary beings that do not exist. Some look like Monsters , other Little Mermaids , etc.

Often, when children have to do an activity, we see how they always look for a model to copy . It’s a shame since his imagination is still not contaminated by the adult world and they usually have hilarious ideas.

According to how old children still can not distinguish what is magic from what is not, and that gives them a lot of imagination.

I remember that a magician once told me that when I did magic tricks to children younger than 8 years old, children did not understand magic, they just saw it as something that could happen. Thus, when the child tried to make things fly, the children did not see their effort, but simply, they see that things fly in their world.

In the Saleta de Creació we want to promote creative drawing .

So for this session we asked the children to create beings based on things they know . We have motivated them to think about animals, people and things that they like so that they can combine it.

Although some have followed our examples, many others, have been carried away and have managed to create extravagant and very funny imaginary beings.

Here you can see some of these beings, like that of Jan whose character with a rugby ball face, has fire hair, the body is an airplane and instead of legs has a snake tail. 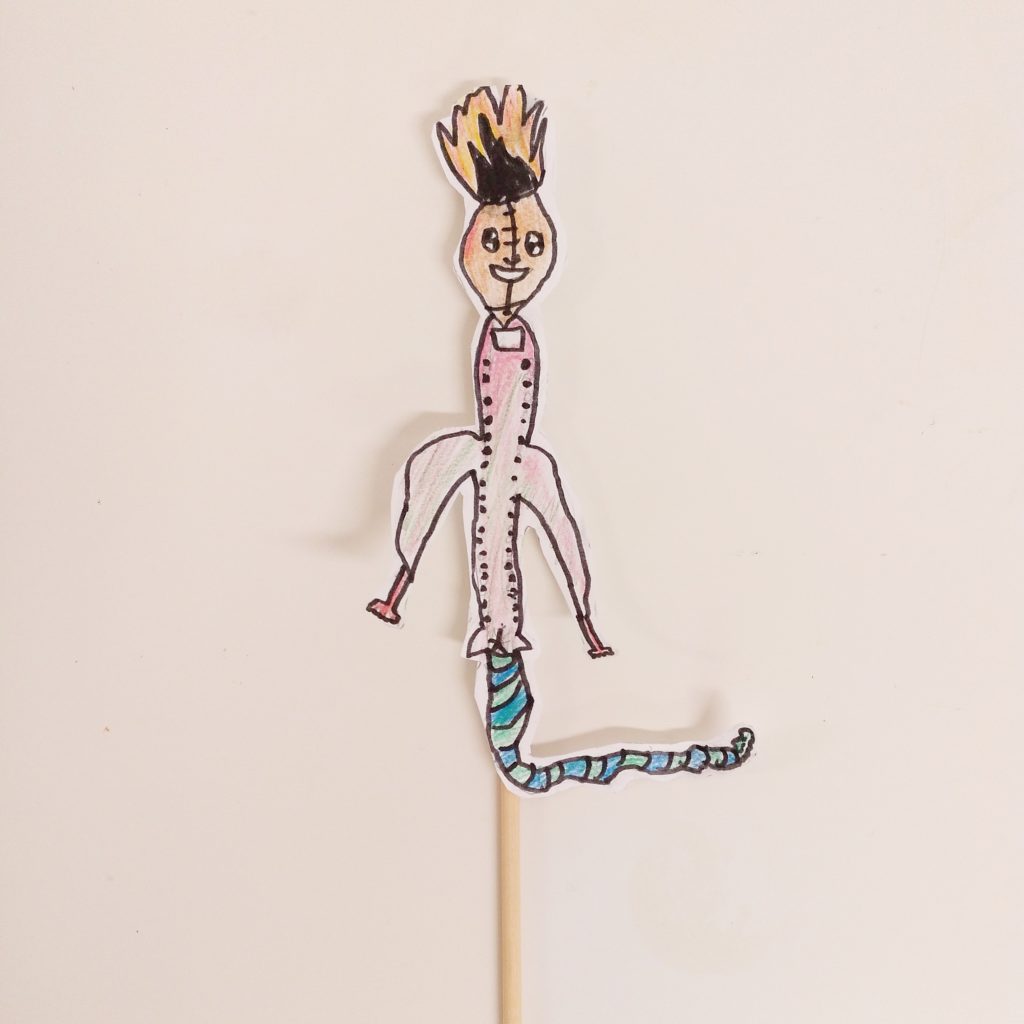 Markel’s animal is a green and blue rhinoceros that has no legs or tail but anchors and, instead of a horn, it has a bulb that lights when it is in danger. 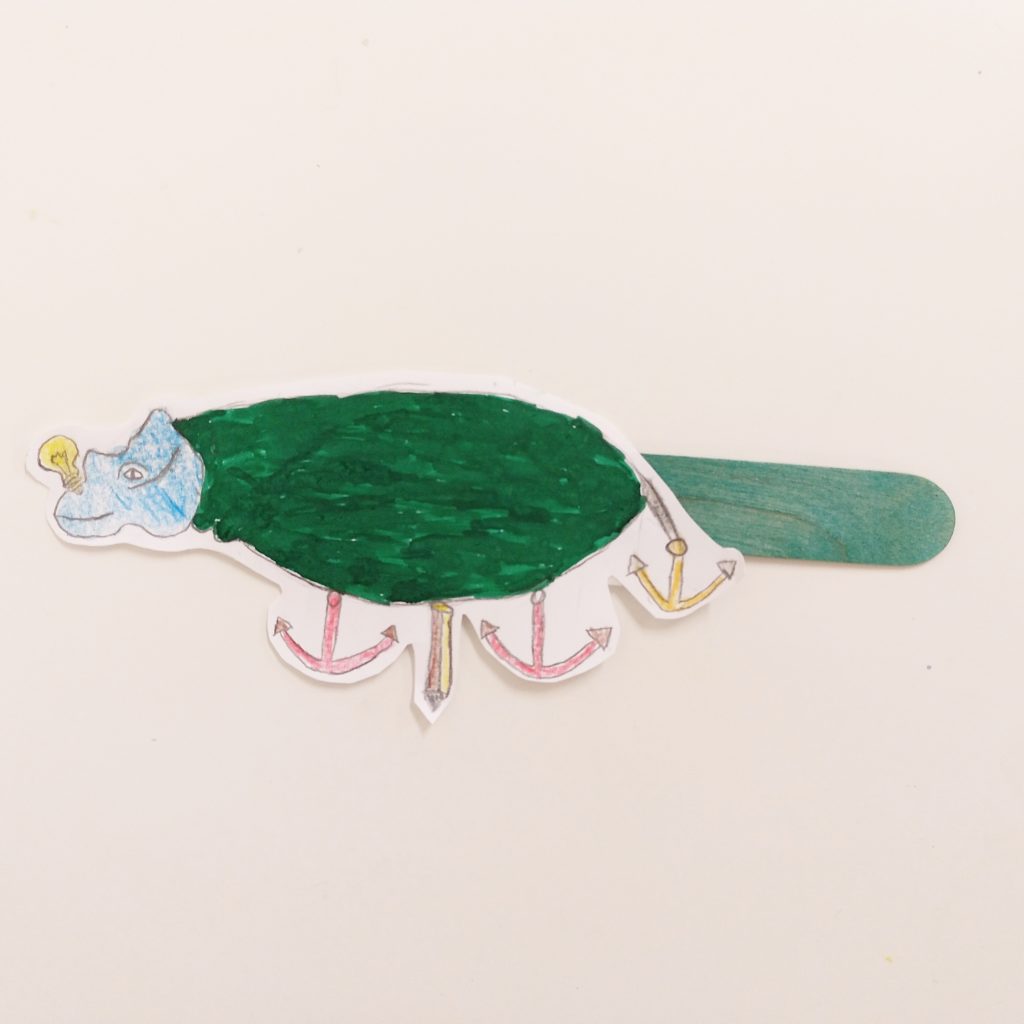 This cute drawing is of Diana, a 4 year old girl who has made a character   with teapot body, head and hair is a rainbow. 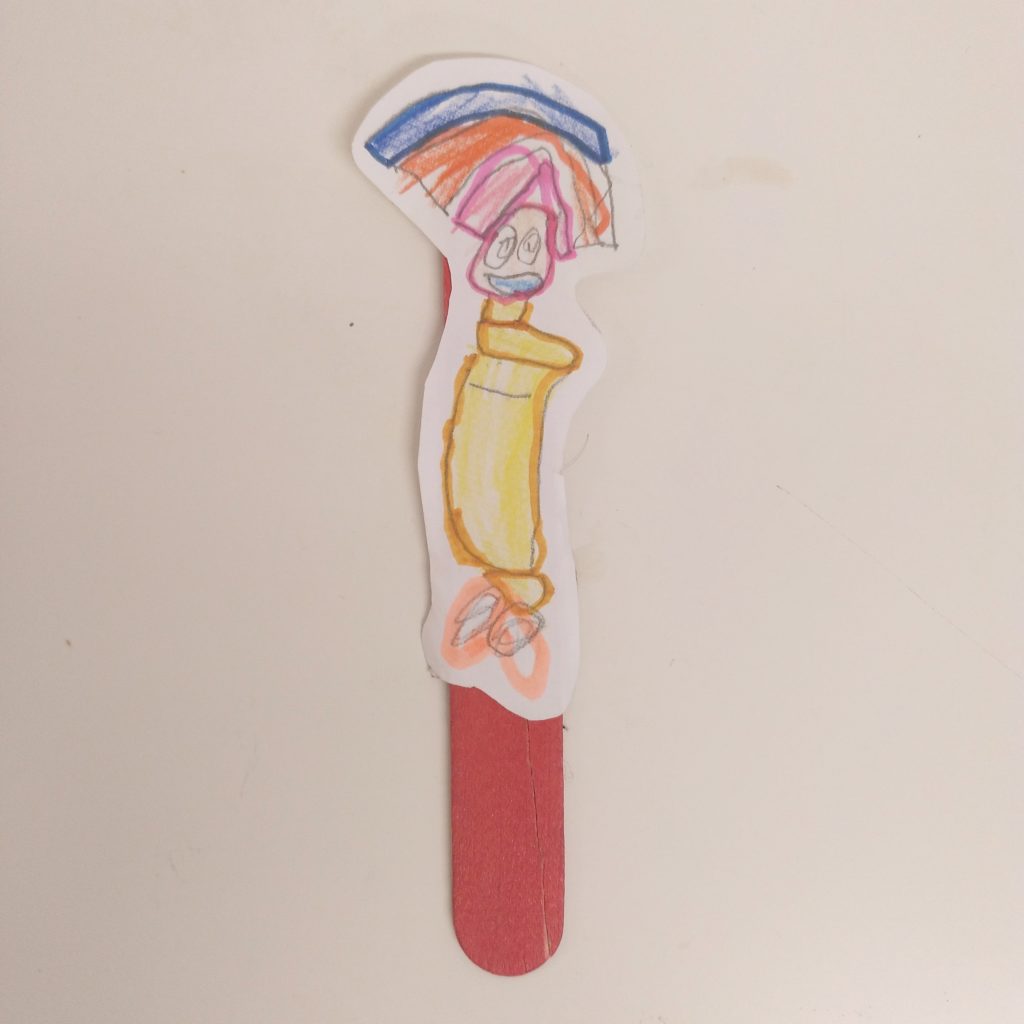 Aniol, 5 years old, has drawn this snake rocket, which almost looks like something out of a Tintin comic book. 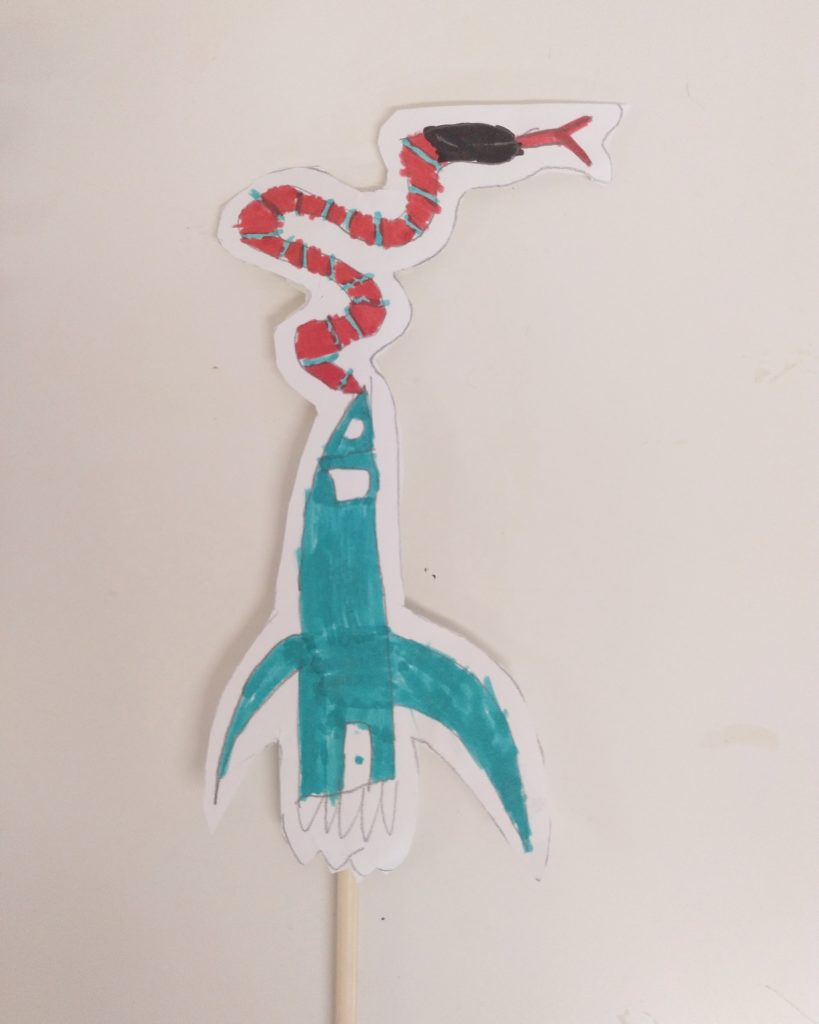 All these characters and many more have been cut out and we have stuck them on a stick of colors. With them we will make a small theater.

In this second part of the activity, the children have to draw a set for their characters.

We have proposed that you do it with one or more partners since the decoration sheets are large. Also in this section have to create imaginary worlds, so that their characters can live there. 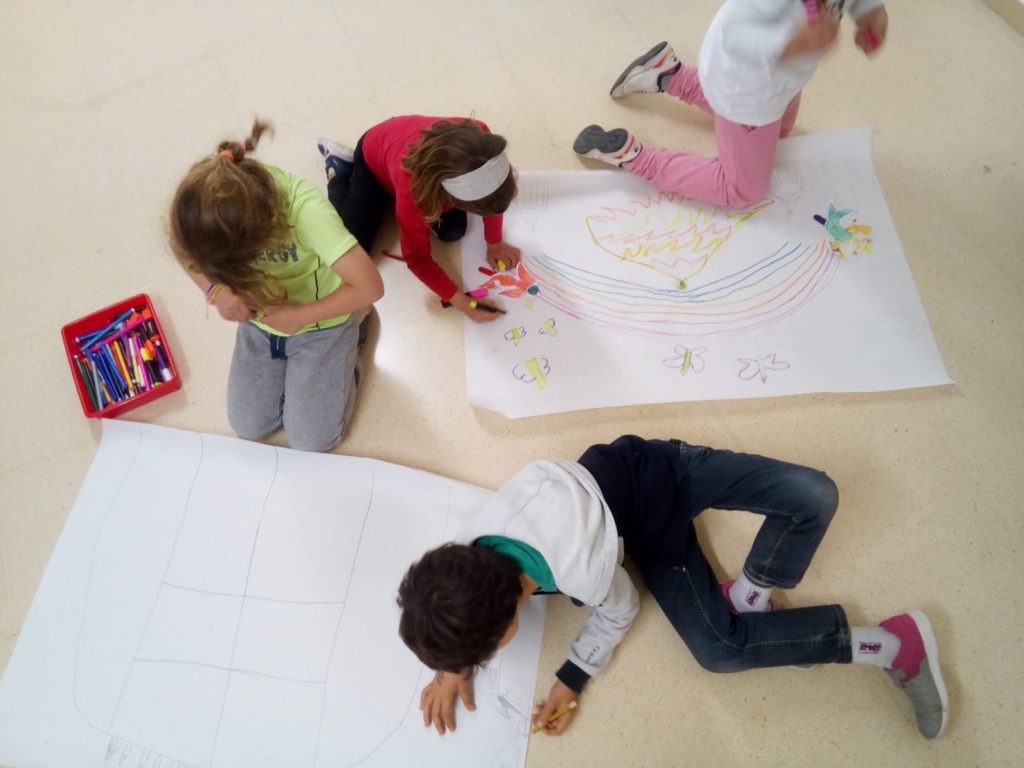 The children have put on the floor to draw more comfortably.

This is the planet world of Jan and MArkel. Is beautiful! 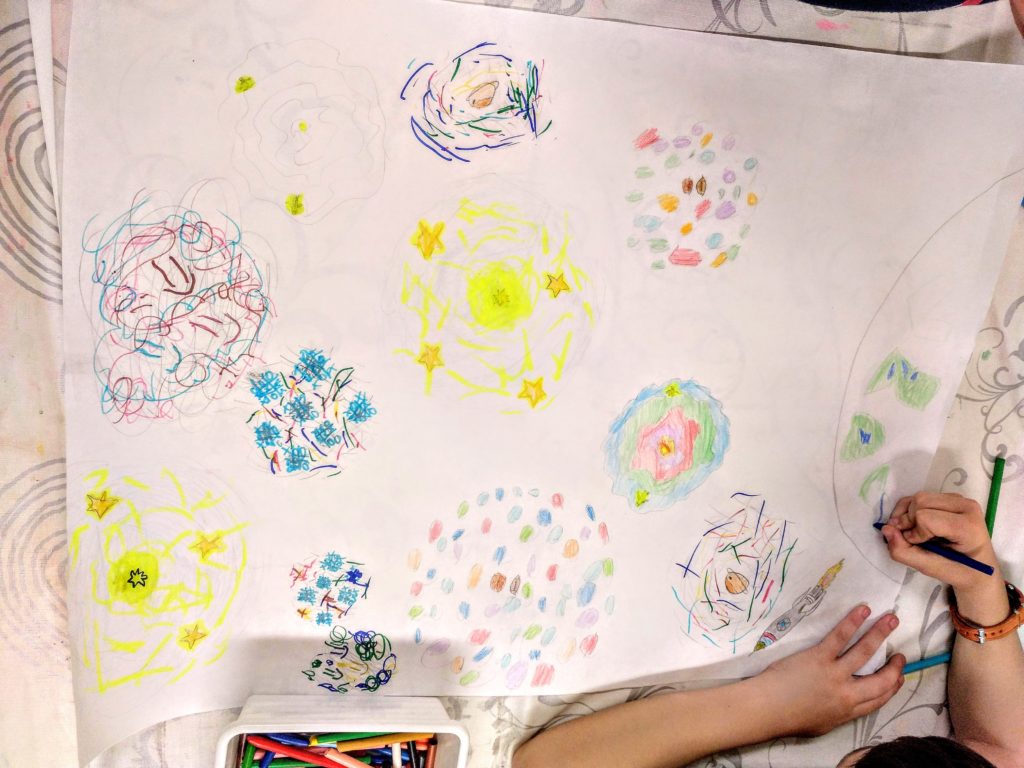 Here you have another very colorful decoration: 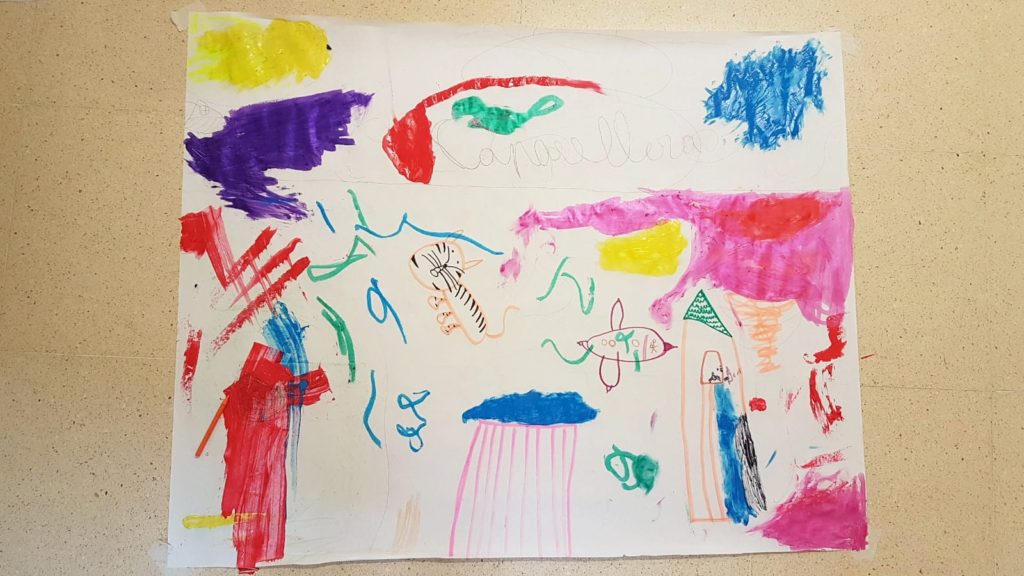 And finally, they have represented a story with the background they have made and their dolls. 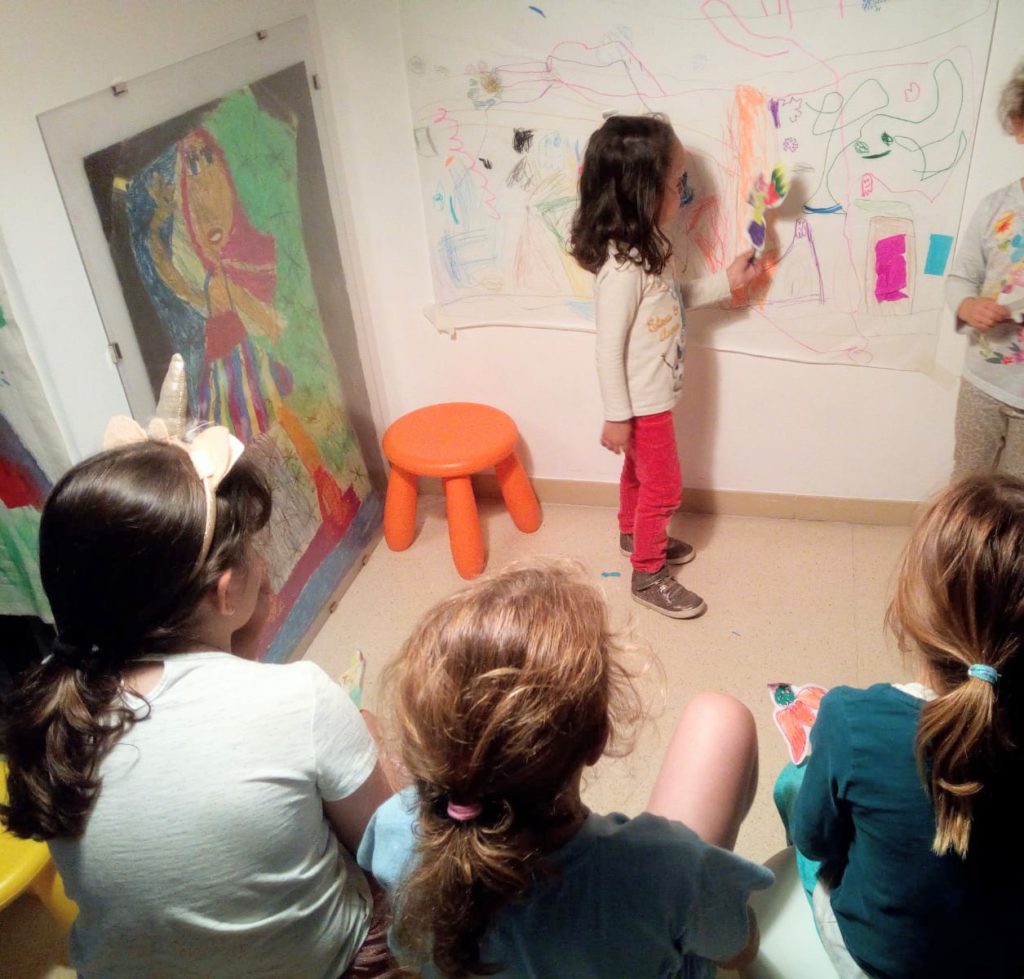 As you can see the sets are also beautiful. Each in his style and enjoying, have been able to let go and create.

The activity lasted 2 and a half lessons.

Every time I like doing long activities, patiently and without haste! Qualities that most children have to continue working since they live in a world of impatience and speed.