Months ago they arrived by chance at La Saleta de Creació two mannequins dressmaker , child size, one taller than the other. We decided to keep them because they are very beautiful and as a romantic object.

Since then the children whenever they arrive, play with them and put their jackets on them.

I suppose that seeing this scene every day, in the end unconsciously, has led us to do this activity.

Today we have placed the mannequins in the center and we have asked the children to dress them up , decorate or dress them with whatever they can find in La Saleta de Creació .

As an extra prop , we have worn a pareo and a hat . The rest of things, they have to look for or create.

Each group is a world.

Here you have some photos so you can see where the creativity of children arrives.

Rita, Nahia, MArkel and Jan have been the first to disguise the mannequins. They have used the tissue paper to make the disguise of the character on the right. They have taken colored strips of tissue paper and applied them as clothing. It is nothing in particular, but colorful and beautiful.They have also been applied to the hair of the character on the left, the woman, giving her a more extravagant and fun look.

The woman has also been given a paper hat , made by them with origami and a tulip from the ones we made in origami class.

I love when they use a resource learned weeks before! 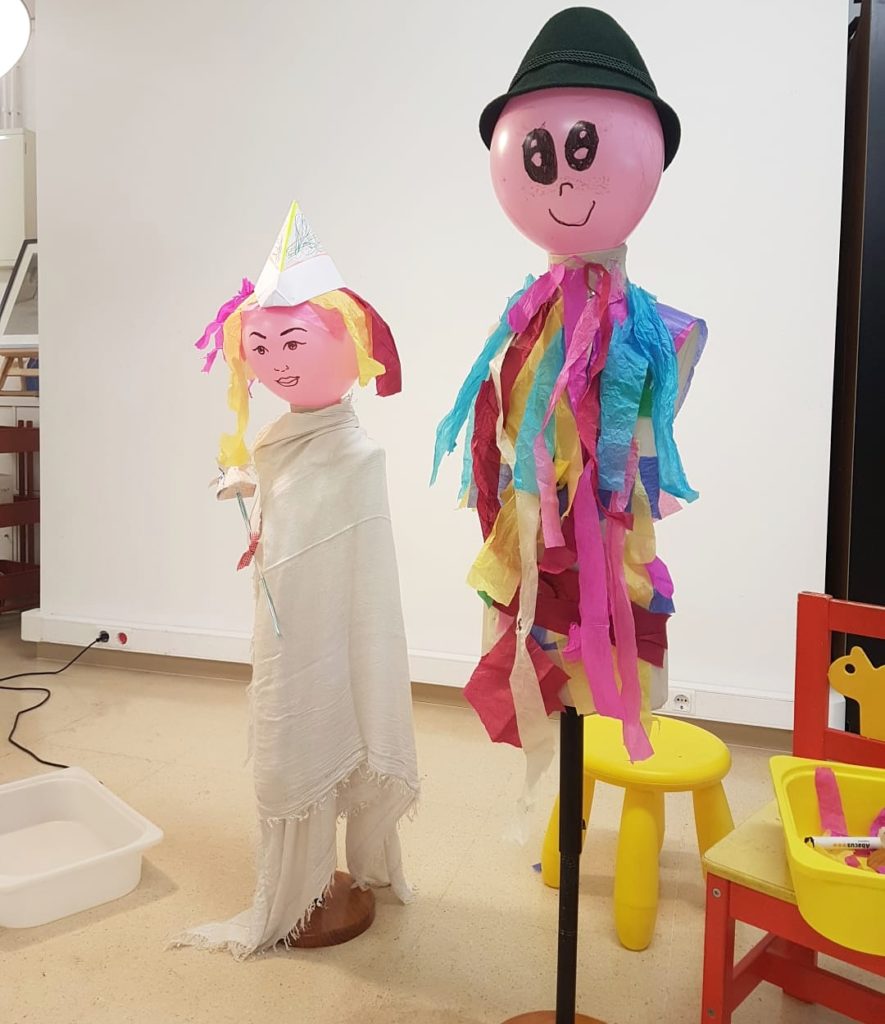 The Mannequins of Pau, Iván, Lua and Ainet are dressed like them.

They have placed the 2 mannequins with the background they liked the most … this background full of colors … ???? 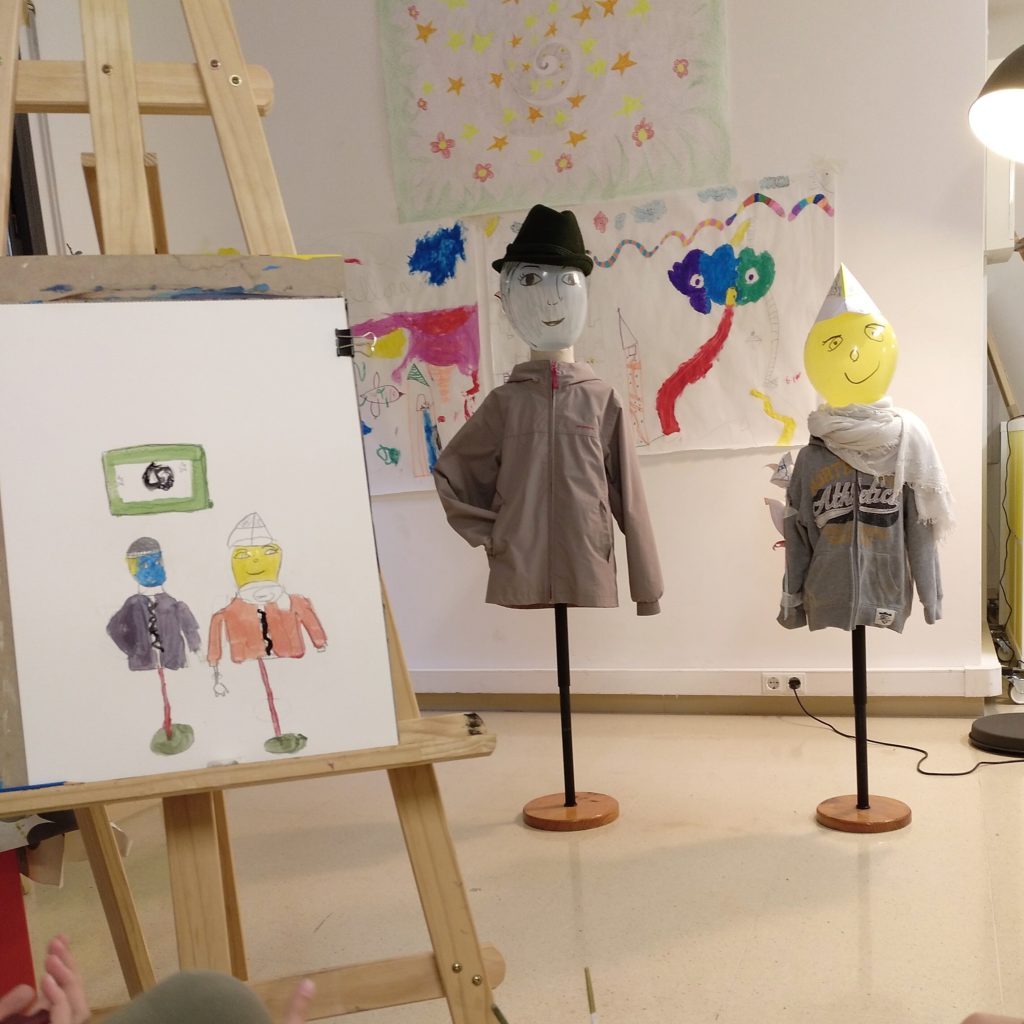 Nicolás and June have recreated these characters that are making them see that they paint , just like them. They have even put them in front of an easel and with colorful palettes! How much imagination! 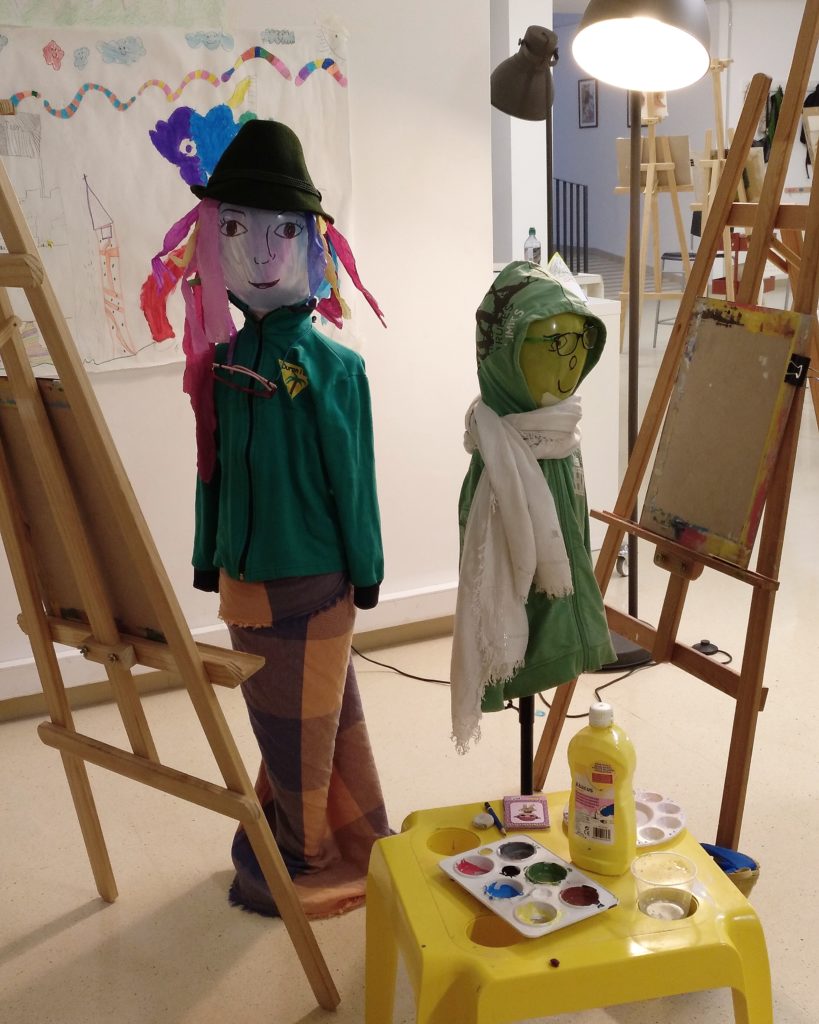 Sofia, Maria , Diana, Nadia and David have made these beautiful characters . The man looks surprised and raises his hands to accentuate the expression. (How nice was the Emotions class !) this simple character and dressed only in a blue jacket, is very successful!

The girl wears the apron of a girl who loves to wear a headband. How jovial and animated is this little girl so sweet and with bangs !! 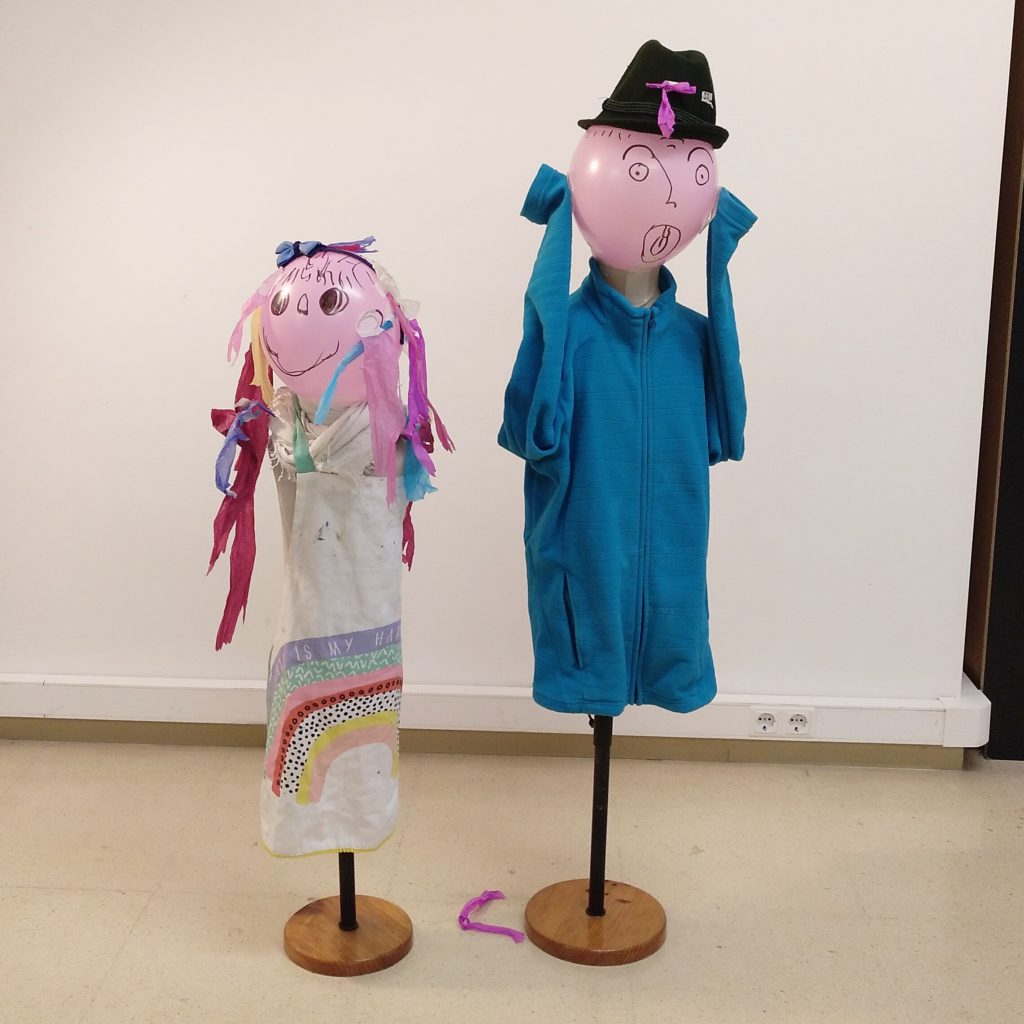 Finally, the group of Pau , Alex and Judit have made this set of Halloween mannequins . 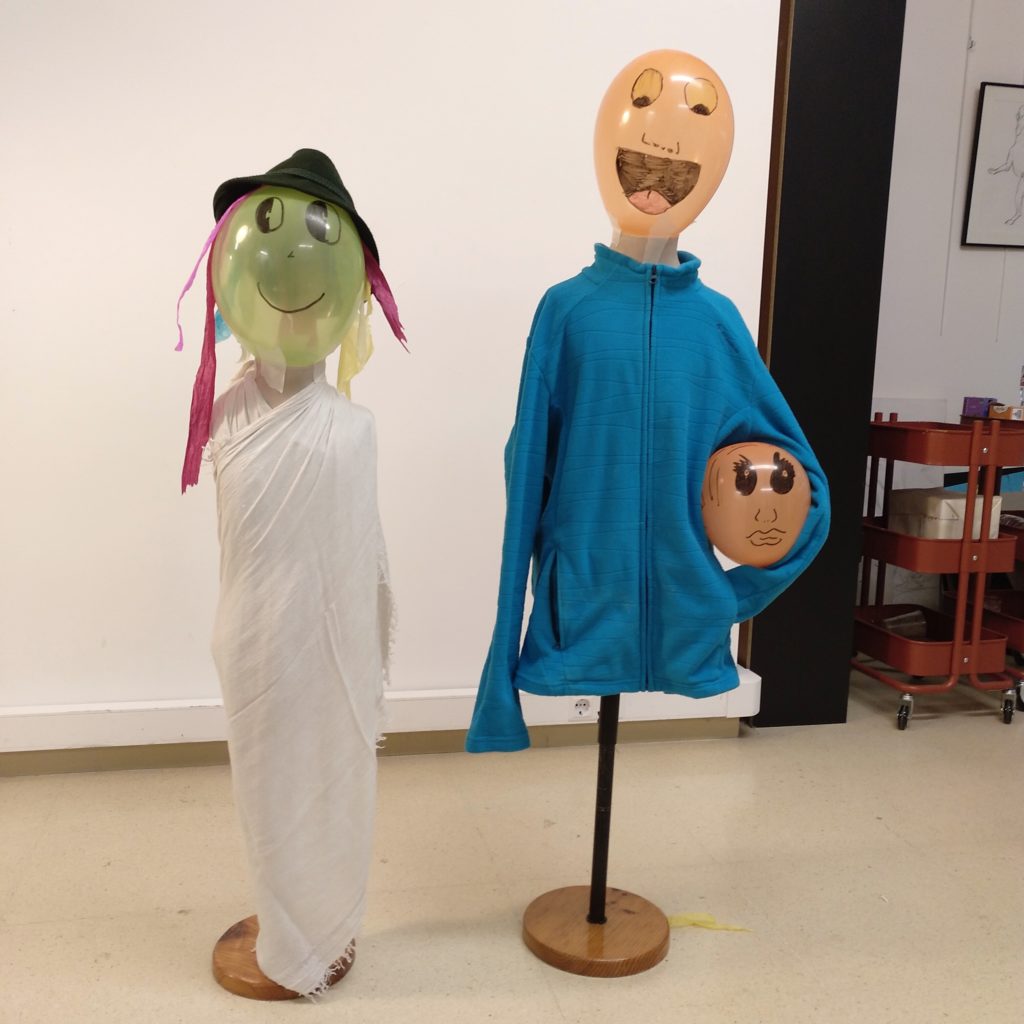 All these mannequins have been made by the children and then they have had to paint them.

Many other fun have emerged from this activity: learn to inflate balloons, inflate balloons and release them … and see how they go through the air, put the balloon in front of the face and act as a mannequin, draw faces of characters …… 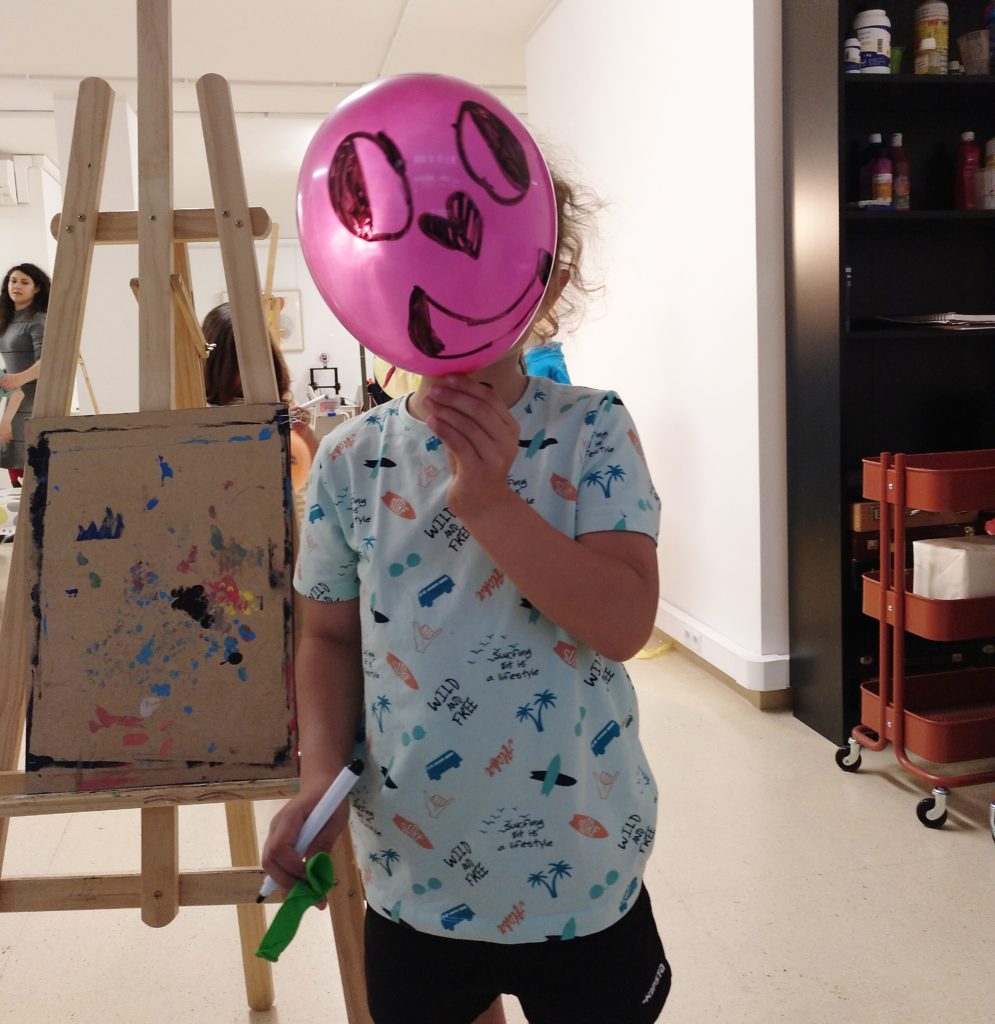 And one that we liked was to make other mannequins in any space where you can hook balloons and dress them. 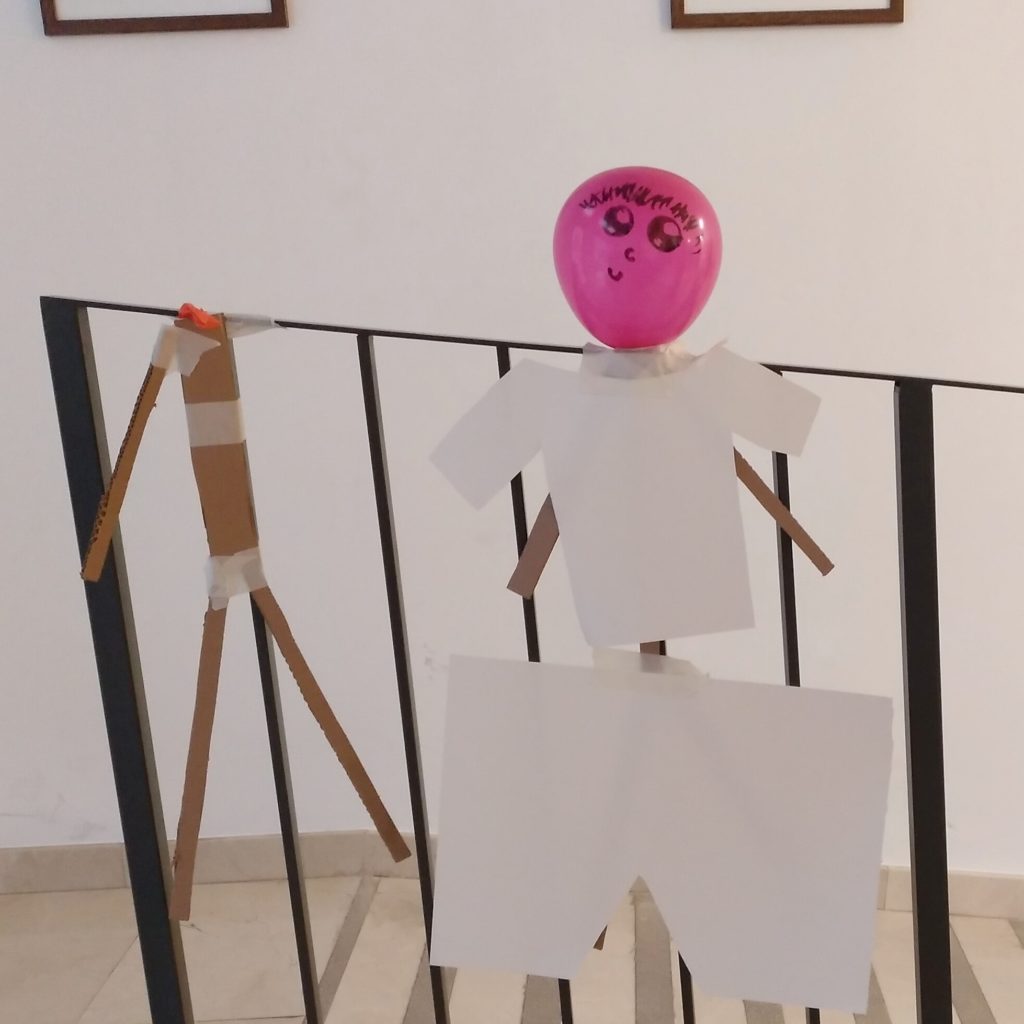 But what most liked all the children, and what they all did was FAKE THE BALLOONS !!!!!