What are the Capgrossos and the festive bestiary?

Capgrossos also called cabeçuts, caparrots, cabets, nanos o nanets are anthropomorphic figures whicha are tipical from traditional fests in different areas of Europe, one of them is Catalunya. Also, this traditional fest is linked to the group of giants. The Capgròs consists of a prosthesis with the shape of a head, usually human, it is being worn over the shoulders of the bearer and it looks like it is a badformed character, with a huge head. The bearer usually sees through the mouth or the throat

On its origins the main goal of this figures were theatrical and festive, with which represented myths, legends, and popular characters, while at the same time Capgrossos are a referent for the identity of the habitants and recreate some historical characters linked to a town or city; like the mayor or a remarkable person. Others choose to represent old jobs that are nearly vanished nowadays, with the Giants and Capgrossos; although these jobs long ago had been very important for the economical development of the cities. Giants and Capgrossos get the title of ambassadors of the fests from cities and social groups

Festive Bestiary is formed by all those figures with zoomorphic shapes either with bearer extern or intern, with full prosthesis or not. These figures have been created by a determinate symbolism, function, and technique .

The objective of this activity is introducing the participants to the zoomorphic giant heads construction through the cartapesta technique. During 6 sessions, we will make a functional giant head which will represent a head of an animal

This technique (similar to that of papier-mâché) consists of the application of successive layers of newspaper (or similar) impregnated with white glue, on top of a positive or negative shape. When this layer of glued paper dries, it hardens permanently and is removed from the mold or in a positive way. The main features of this technique are its simplicity, resistance and low weight, which make it ideal for making this type of figure. On the other hand, it is a technique that implies a minimum cost and that does not incorporate toxic elements or procedures.

Cartapesta technique needs a positive or negative shape, over it we will apply the glued paper to get the wished shape. In this case, the paper is applied on top of positive shapes, made from balloons, cardboard and other reused elements. With these elements (spheres, cylinders, cones, planes, etc.), the basic shapes of the figure will be created, which will then be lined with newspaper to define its final surface and shape. Later the figure is polychrome.

What will you learn?

Working with animal real models, apart from the biology and zoology knowledges that you acquire while you observe the animal and create the capgròs. You develop a huge capacity of analysis and you learn about the anatomical parts of the animal (from the animal’s head) and also the transcription of the basics geometrical tridimensionale forms.

The fact of working with basic geometric shapes promotes the development of the capacity for synthesis and spatial intelligence; which is understood as the set of mental skills related to navigation and the creation, understanding and rotation of objects within our mind (architecture , engineering, etc.). The representation of these mental forms with constructive materials favors the development of bodily intelligence; which is understood as the set of skills related to the use of hands, designed to carry out specific movements with precision, as well as to faithfully translate mental diagrams into physical elements. The rational and controlled use of physical abilities. (Cafts activities, sculpture, sports, dance,etc.) 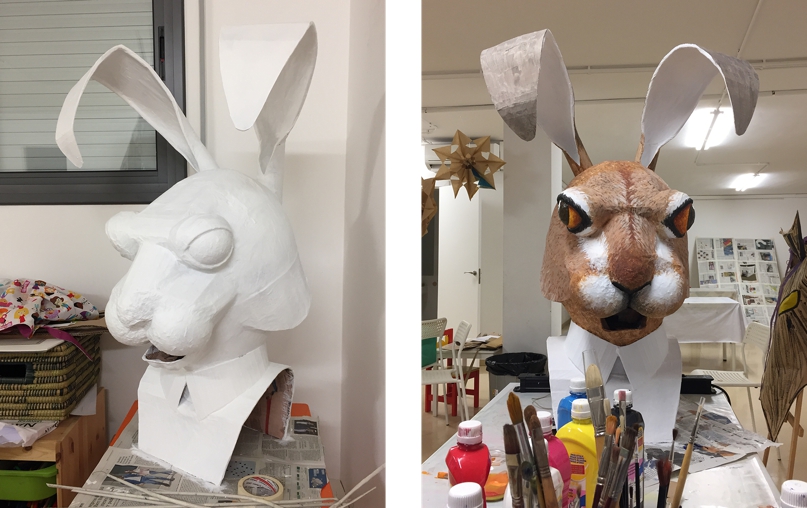 With the polychromy of the figures they acquire knowledge about the theory and mixing of subtractive colors (work with primary colors), sculptural polychromy (shadows are represented through light and not color) and even “trompe l’oeil” (color can change the perception of volume). 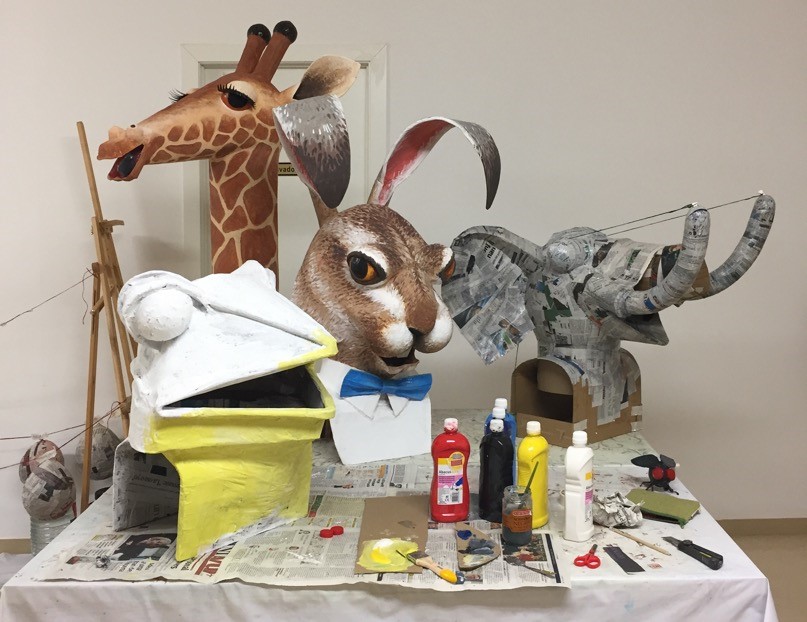 Giant Heads finished and in development and in process. own elaboration