We have noticed that children, when they draw, usually put the same expression on their characters: Joy or Sadness . It is difficult to get out of these patterns because they do not know how to express other things.

For that reason, we thought it important to start introducing new expressions : Serious, Angry, Surprised and Doubtful, as well as Sad and Cheerful.

With this, we seek to expand their vocabulary in drawing and to be able to express new emotions.

Later, we will introduce the gesture and posture of the body that is associated with each emotion.

Facial expressions reflect an emotion or a state of mind:

We have prepared several activities that help us see and understand the features of different emotions. 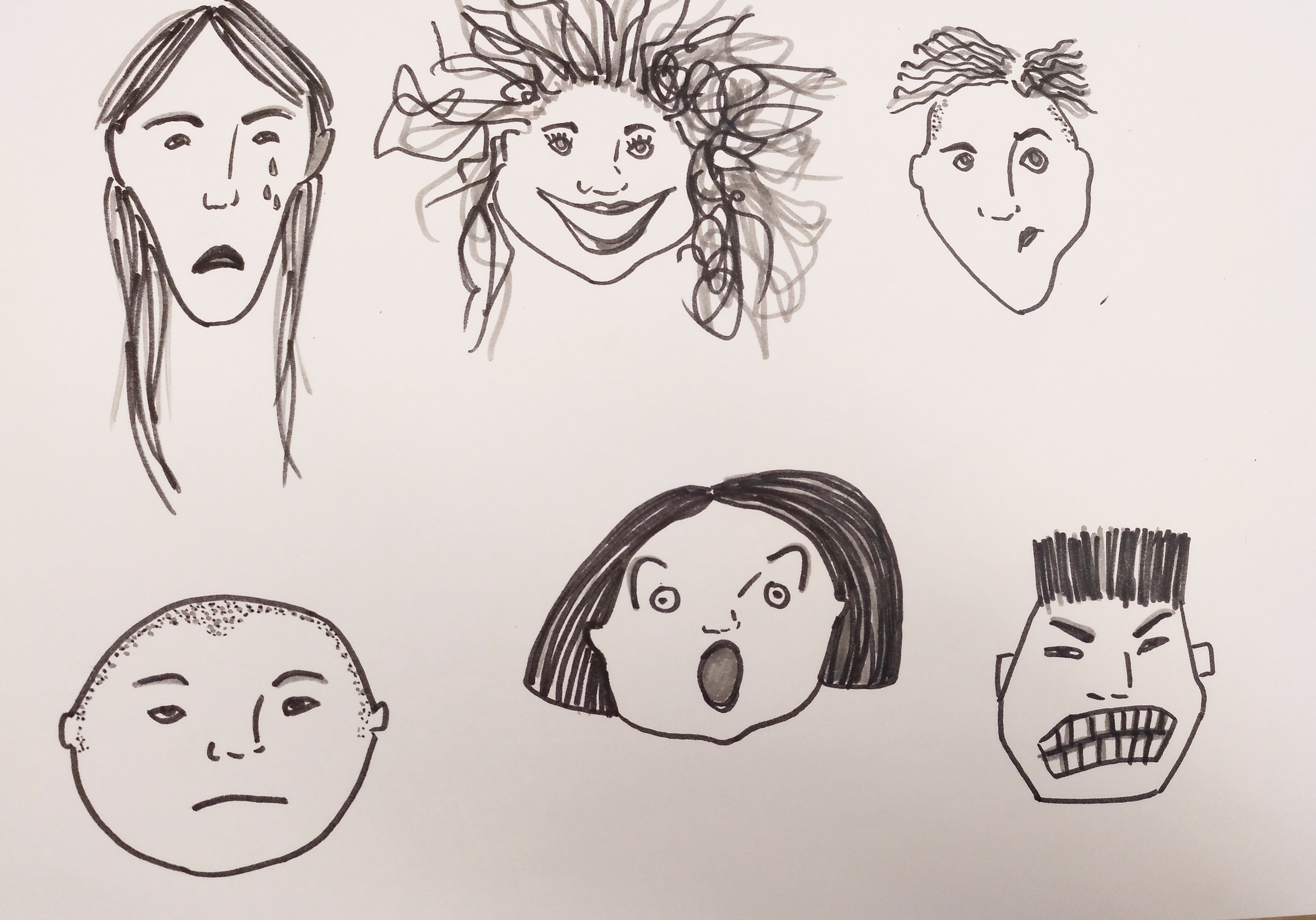 To begin with, we have explained to the children, with our drawings, the importance they have   the different features of the face separately. Normally, children do not put their eyebrows when drawing and nevertheless, they help us a lot to identify the mood and see for example if someone is angry, sad or surprised.

The mouth and eyes also help us distinguish people’s emotions. It is not always easy to think what kind of mouth or which eyes correspond to a person Doubtful, Serious, Angry or Surprised. 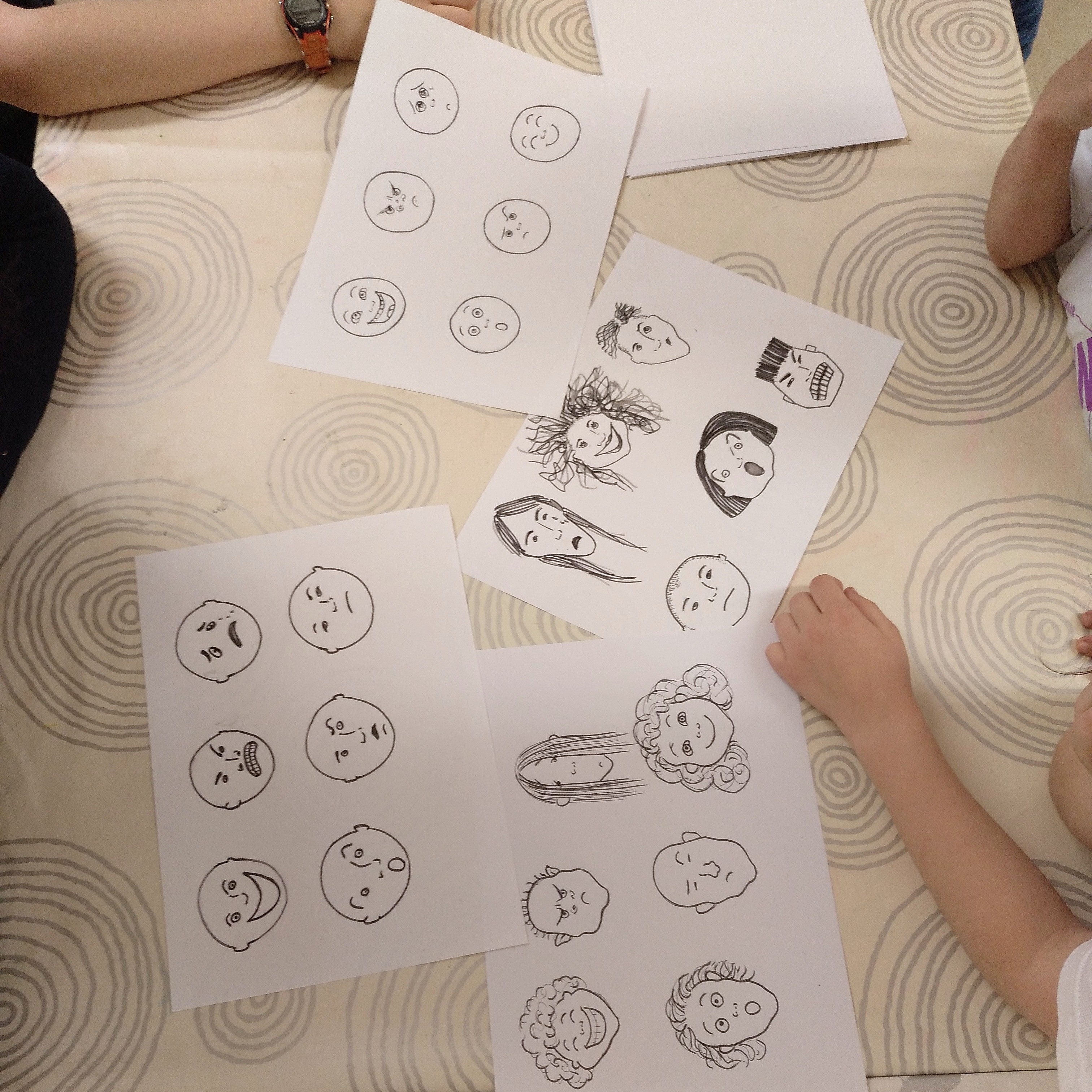 How do the eyebrows, eyes, mouth and nose combine to create an emotion?

We have drawn a face on a sheet and several types of eyebrows, eyes, mouths and noses that can be moved so that children can combine it and see what expression comes out. 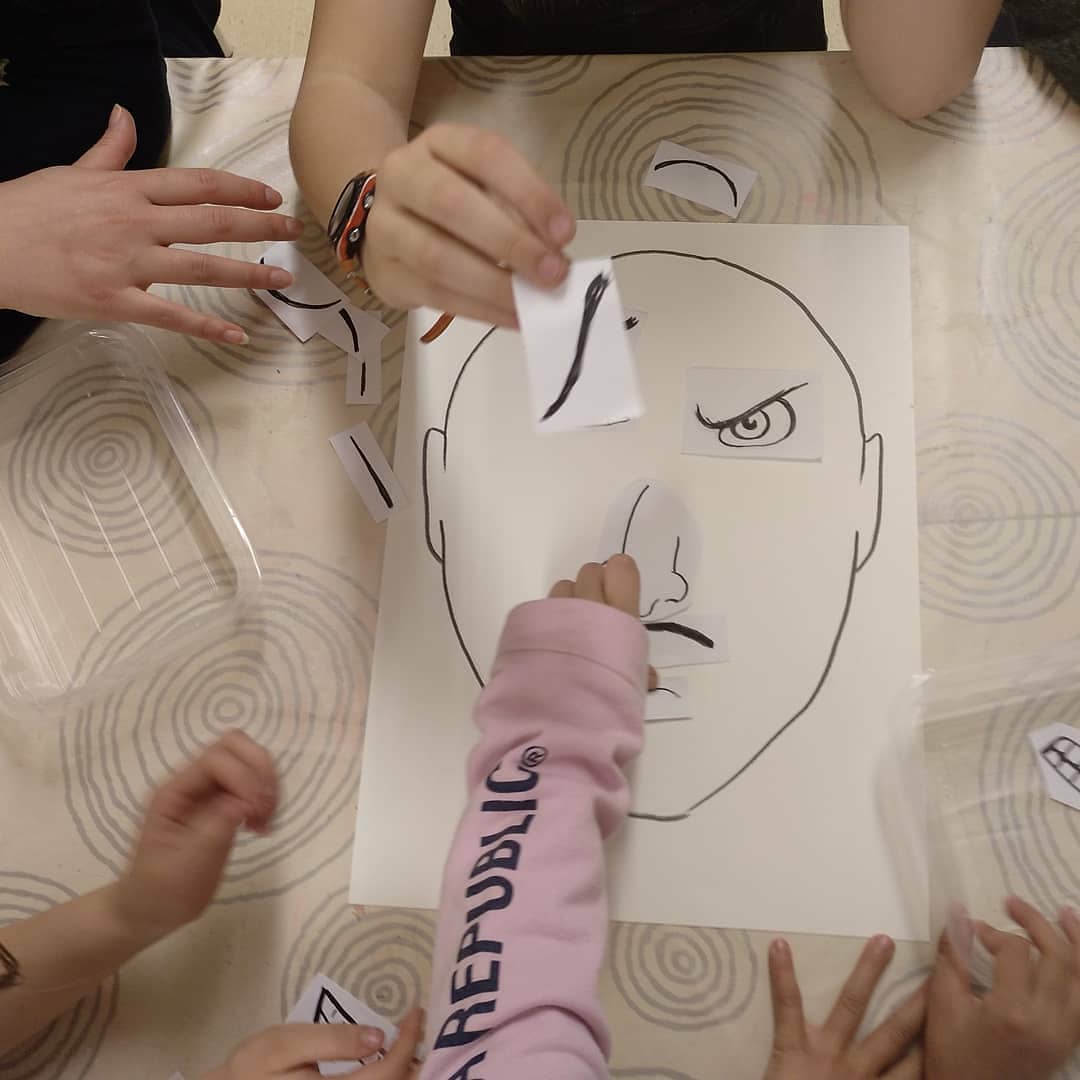 We have practiced together to give the character an emotion.

Here we have Mr. Angry . Although he has several eyebrows, the ones that make him more angry are the frowning eyebrows . The nose is so small that it further highlights his anger. And the mouth that they have put on accentuates this angry character, making it almost bad. 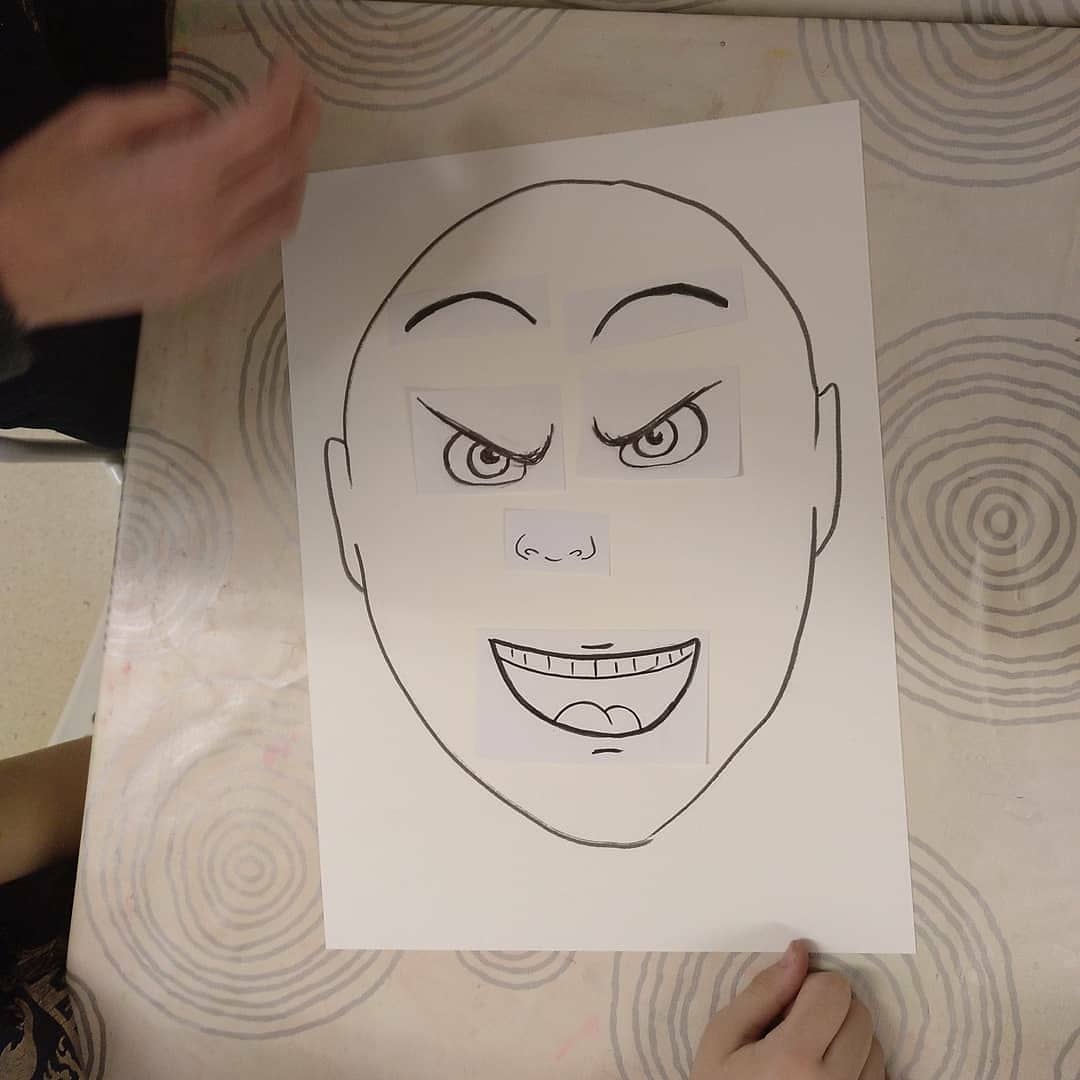 In this image, on the other hand, it attracts a lot of attention with raised eyebrows , it is like questioning . They have given him a tiny eye that tells us that he is observing with thoroughness; anda mouth also tiny , closed and dissatisfied that reinforces the idea of ​​not giving an opinion. At the same time, the nose is large, as if wanting to smell a trap or something unknown. All these elements, indicate us that it is Mr. Doubtful . 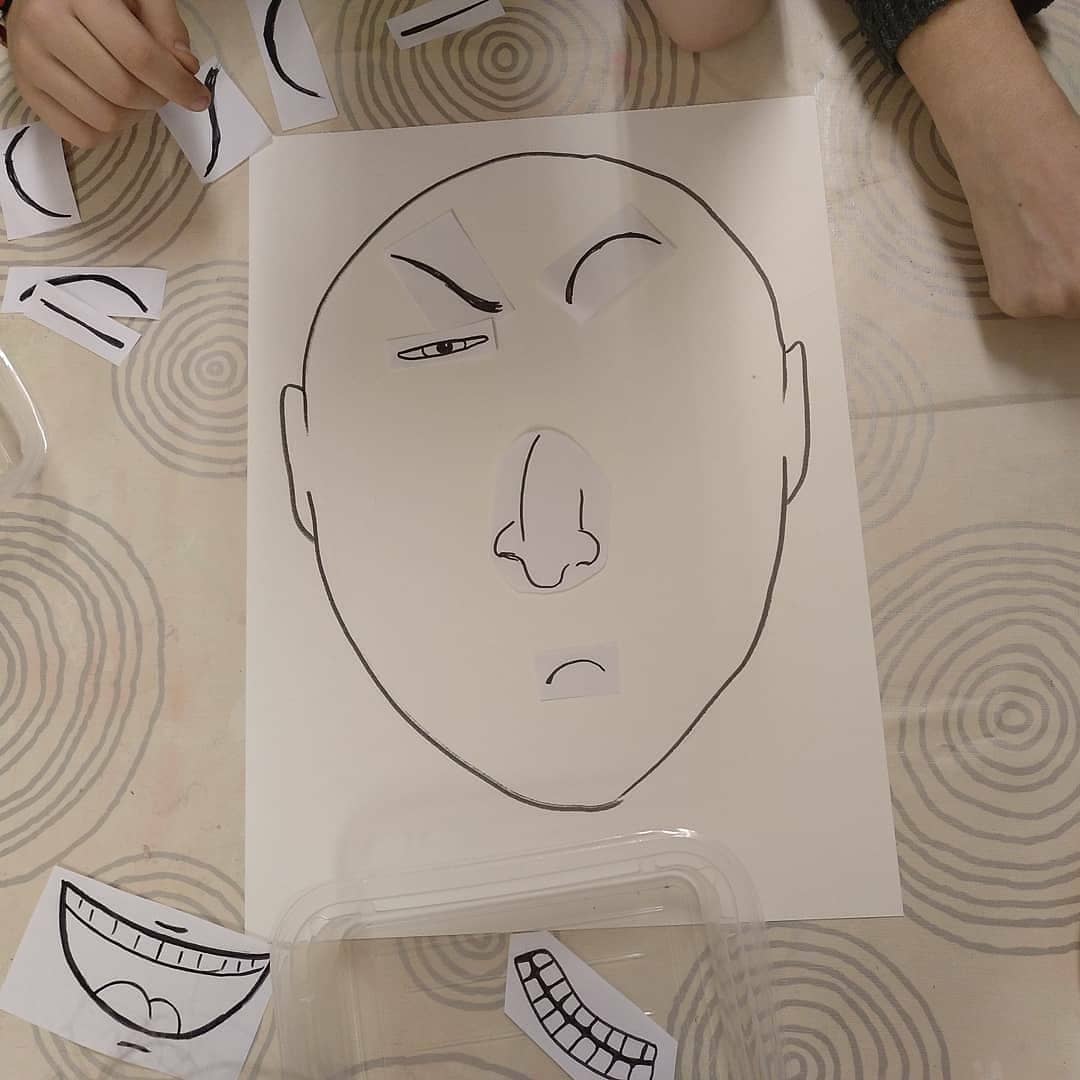 It is very fun to transform the character and experiment with everyone. You can try to do it!

Then, we invited the children to draw an emotion .

To choose it, we have built a very large dice that instead of numbers has emotions. By throwing it, chance has decided that each child draws. If they have already done so, it’s time to throw again. 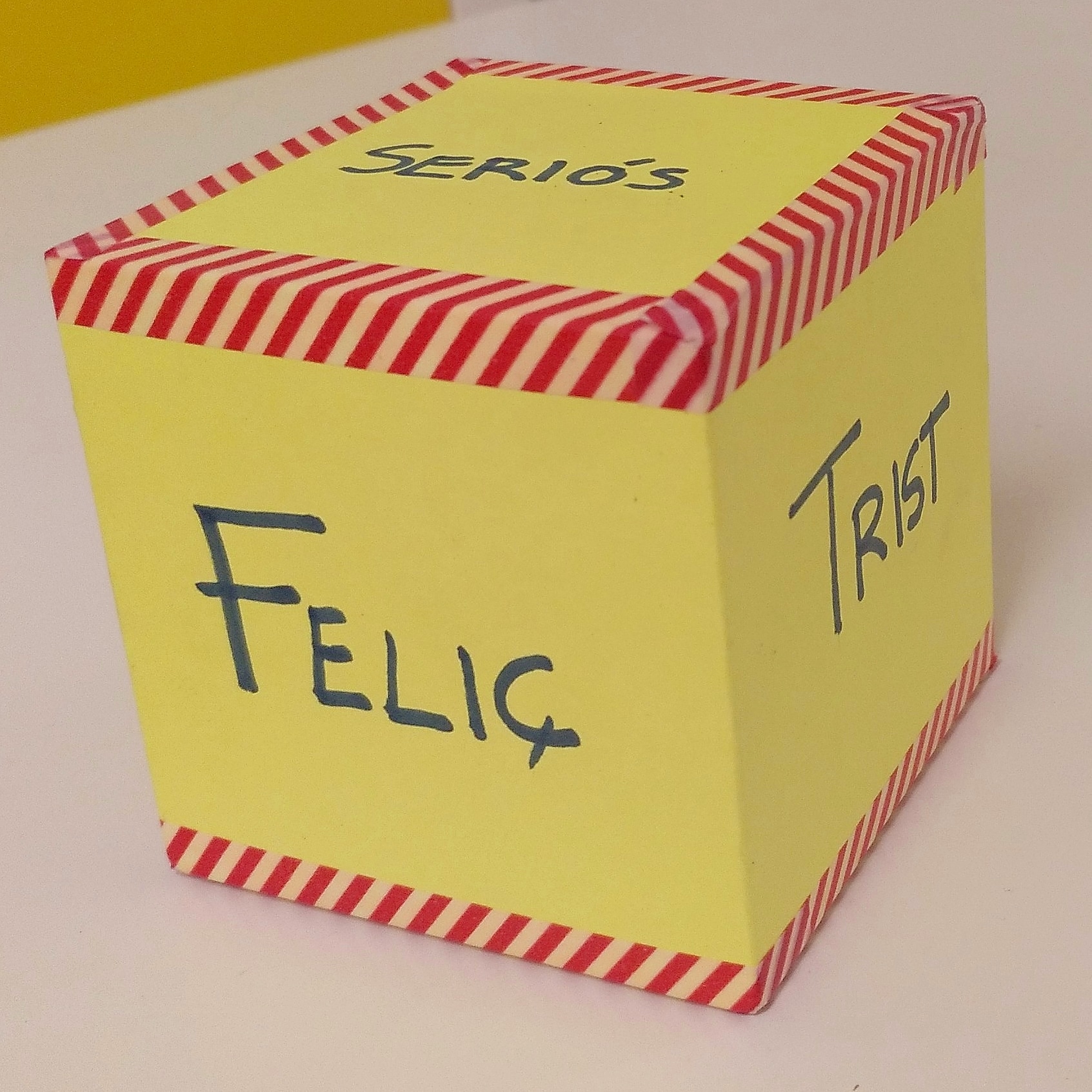 The children have loved to roll the dice and start doing this observation exercise. 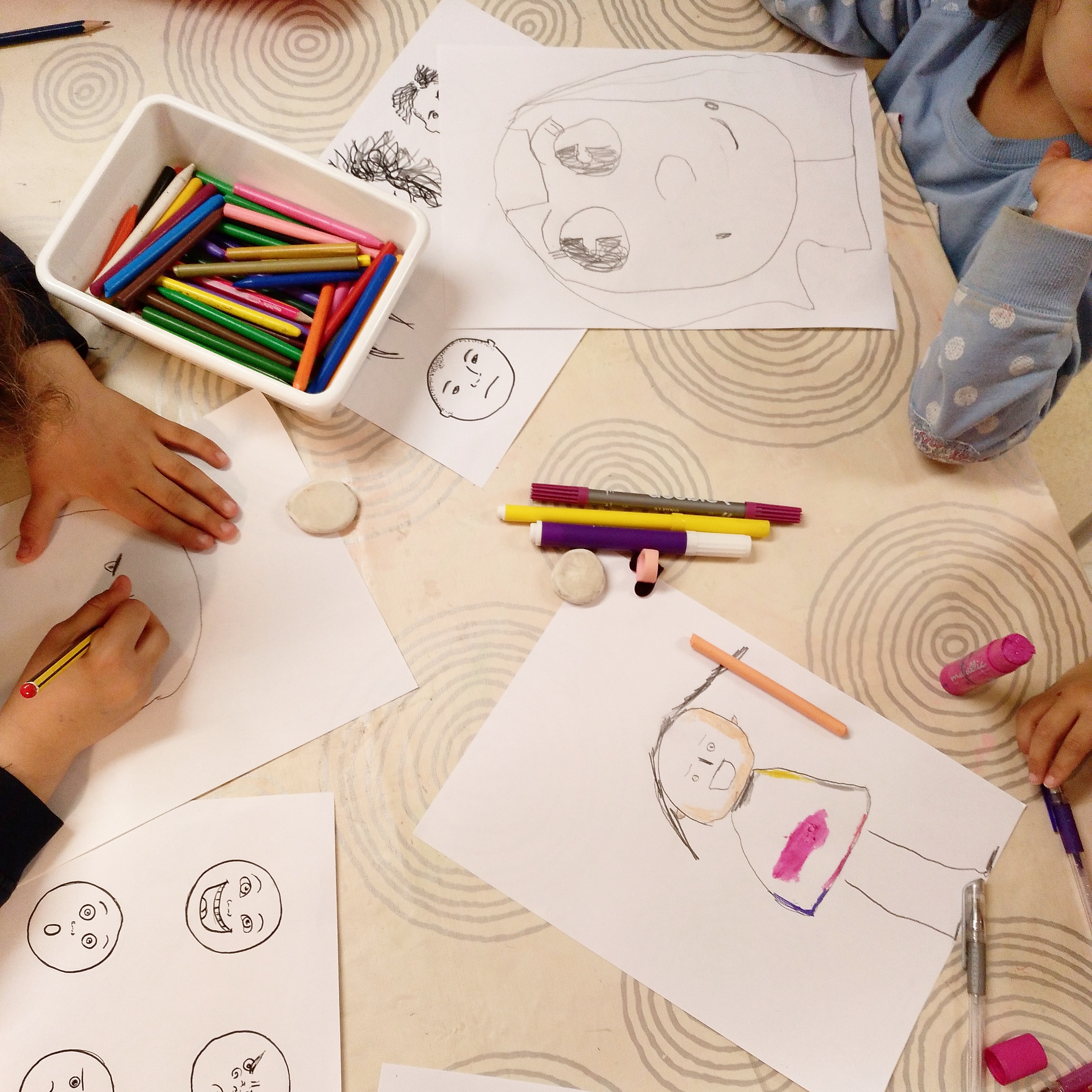 Here we leave some images of each character:

Mrs. It would have expressionless mouth, neither smiles nor sad. The nose is small, the eyes are fixed and the eyebrows reflect this concern and seriousness. 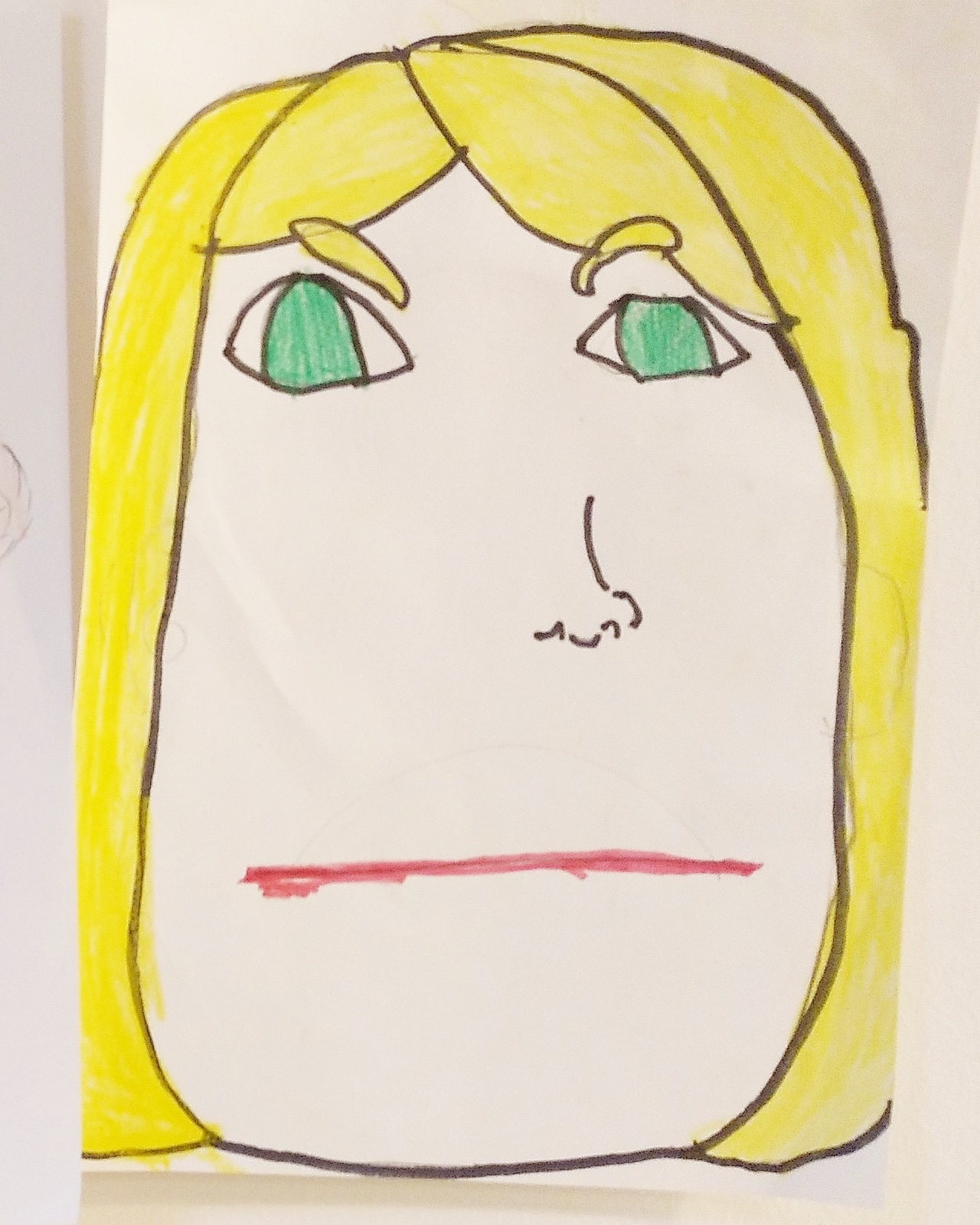 Mrs. Sadness is represented with bowed eyebrows, mouth bowed down and tears in eyes. Laura has also added some clouds and rain to accentuate this sadness.

Diana’s, on the other hand, has put different eyebrows and this changes the sadness for a sadness-anger. It is very interesting to see the effect of the eyebrows and how they can modify the expression. 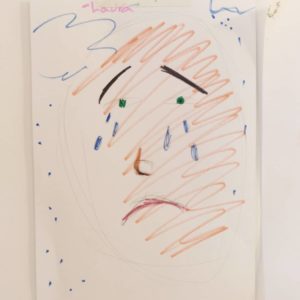 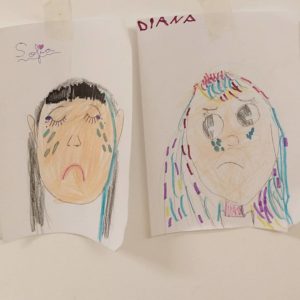 Mr. Surprised de Markel has raised eyebrows, rounder eyes and a round mouth. 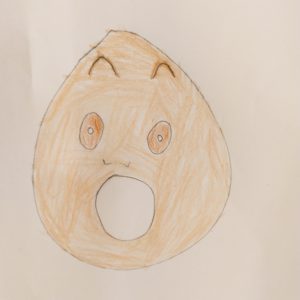 The one of Pau has the same characteristics but it is different. It is curious to see how it resembles the work “El Grito” by Munch. 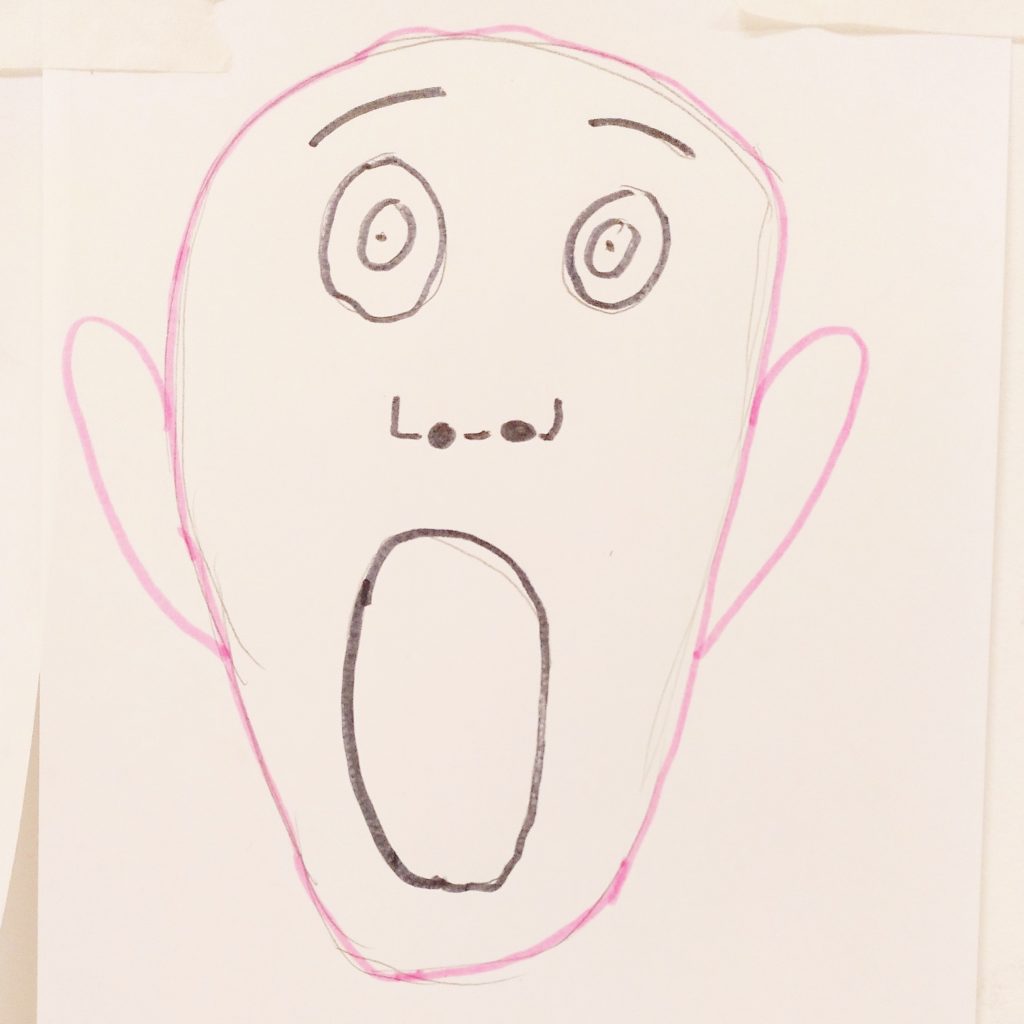 Mr. Doubtful of Jan raises an eyebrow to question, has eyes like a line and mouth makes a face as if wondering something. 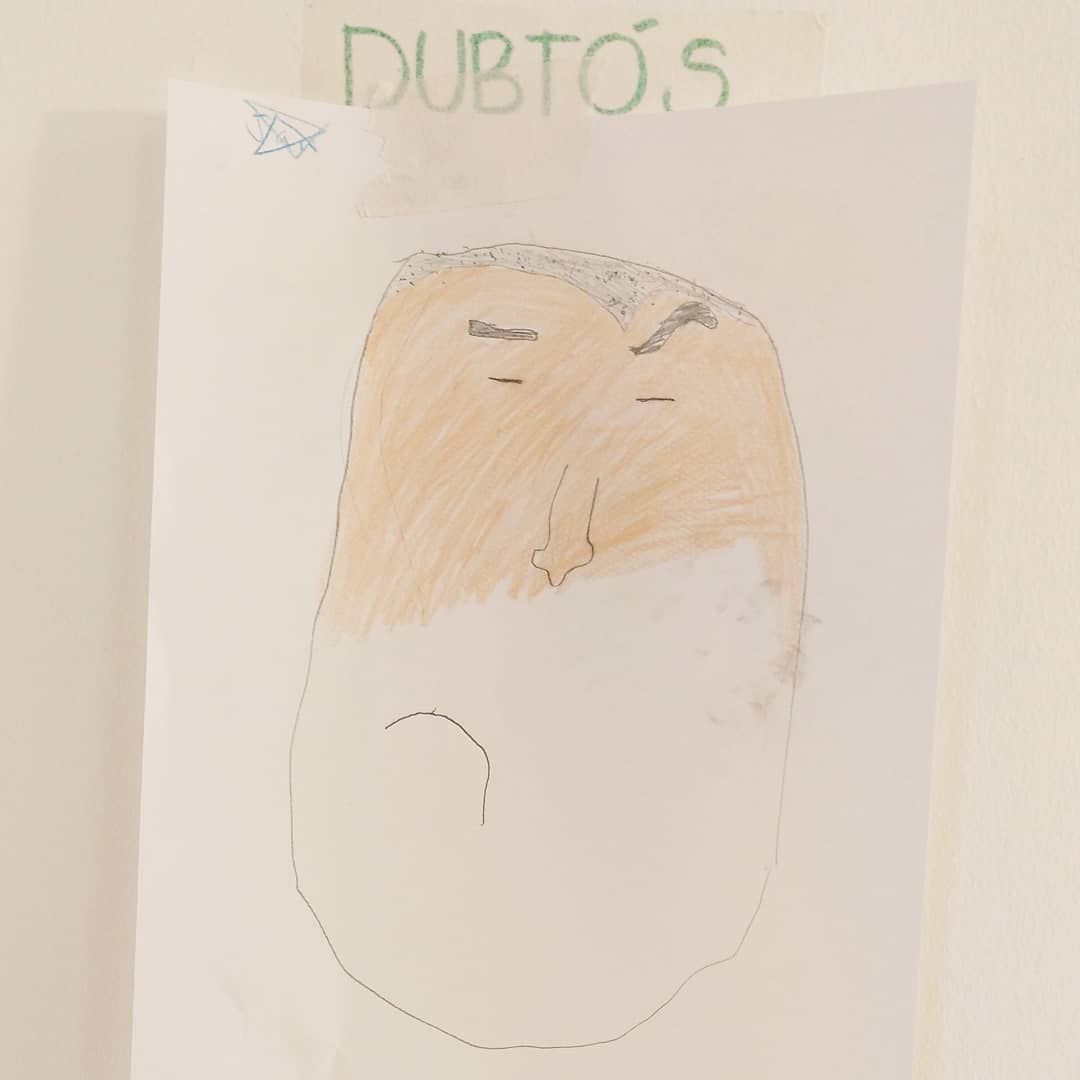 The Angered Mr. de Nicolás is very bad . His eyebrows are furrowed, his eyes fire, his nose breathes very strong air, his mouth is open, he is about to bite and his teeth are missing, like pirates.This Mr. is very very angry.

Mr. Angered Nahia also has very brows and very slanted eyes. He breathes hard through his nose, so much that his cheeks have turned a different color. And his mouth is also open but tilted down. This man is angry and can not contain himself. 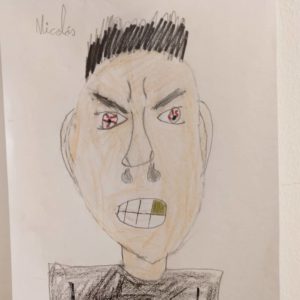 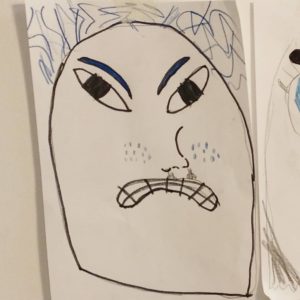 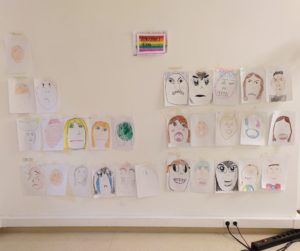 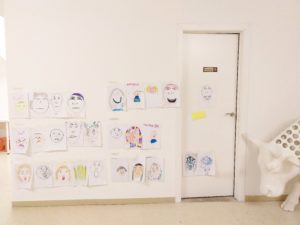 Some child has wanted to learn how to make the dice and has adapted it to their needs.

Nicolás has spontaneously made a die with different meals . On each side appear different dishes that you eat during the week. Here you can see some of the dishes: Broccoli, Fried egg, Macaroni. His mother laughed a lot when she saw him. 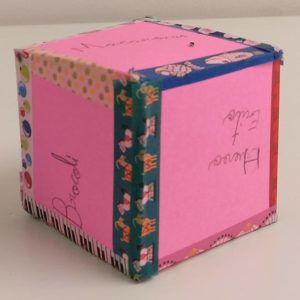 Yune , on the other hand, has decorated it with things that they like and make him happy like the sun, the heart and the butterfly. 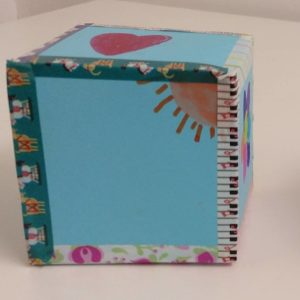